The Agency List is the place to go to best understand the relationship between your Accounts and Agencies.

To get started, as a Salesperson or a Manager, click on the Agencies link from the left navigation menu.

Managers can perform Account Reassignments by Agency from the Agency List. This is most beneficial when you have multiple accounts from the same Agency that you need to reassign to another salesperson.

You have the option to reassign an entire agency from one salesperson to another or to reassignment part of the accounts that the agency represents from one salesperson to the next. When reassigning by agency we strongly recommend that you group your Accounts under Agencies first via the Options and do NOT Display Accounts by the latest Agency only. 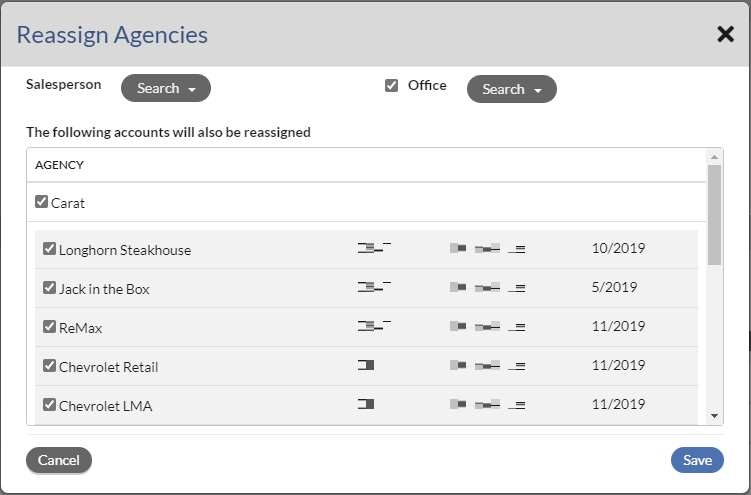 Please keep in mind that while you can reassign from an Account List, the following guidelines for Partial Reassignments only pertains to those reassignments initiated from the Agency List.

A partial reassignment is when part of an Account is reassigned to a new owner but the original owner still retains a part of it. For this example, let’s say that I have an account with 3 outlets, and I reassign 1 of those outlets to another salesperson so that now 2 salespeople handle the account.